Contributing to our Children's Tomorrow

Executive Director of the Foundation

The McGill-Toolen Foundation was first established in 1978. It began as an organization dedicated to the promotion of alumni support for the McGill-Toolen Catholic High School and to the creation of a diocesan office for the organized solicitation of funds. Under the original Foundation, the Catholic High Schools Alumni Association of Mobile (CHSAAM) was formed and the annual fund solicitation program began. In 1996, with the authorization of Archbishop Oscar H. Lipscomb, the McGill-Toolen Foundation was reconstituted for the purpose of addressing the need for stable, long term financial support for the school. The Foundation's endowment reached $1,000,000 in 1997 and has continued to grow in value through prudent investment of the endowment corpus in publicly traded stocks, bonds and mutual funds, planned giving contributions, and the annual receipt of a share of monies collected by the Annual Fund.  Since its inception, the endowment has contributed more than $1,000.000 to the operational budget and special projects.

There are three ways to contribute to our scholarship program:

Be a Scholarship Saint and Donate

“No child should be denied his or her right to an education in faith, which in turn nurtures the soul of a nation.”

Memorial gifts to the McGill-Toolen Foundation meet two important needs. First, the gift allows you to express your feelings at the loss of a loved one and second, the gift supports McGill-Toolen's unique and time-honored tradition of educational excellence. Memorial gifts may be restricted or unrestricted. Appropriate cards are sent to the bereaved family indicating your memorial gift was made without disclosing the amount of the gift.

It may give you comfort to know your gift is helping us to advance our mission of providing a quality education which enables our students to grow in faith; search for knowledge and truth in mind, body, and spirit; and to continue building the Kingdom of God on earth.

Memorials should be sent to the:

In an effort to raise endowment funds, join the McGill-Toolen Foundation in the month of December for our Inaugural Light of Life campaign.  The Light of Life campaign offers individuals a unique opportunity to honor their loved ones during the holiday season.  For your generous gift, an ornament will be personalized with your loved one's name and will be placed with loving care onto the Light of Life tree.  The tree will be displayed in the McGill-Toolen Catholic High School Agora where it will shine throughout the holiday season.

HOW TO DONATE TO LIGHT OF LIFE:

1. Online-click on the donate now button below
2. Mail a check along with the Light of the Life form (right side panel)
3. Call the McGill-Toolen Foundation office (251.445.2939)

Endowment Funds Are Gifts That Secure the Future!

"Do not forget that the future of humanity is in the hands of those… who are capable of providing the generations to come with reasons for life and optimism."

The McGill family provided the first “planned gift” in 1896 for a Catholic High School in Mobile.  Their legacy still lives on today as the earnings from the McGill family gift have supported the school for more than 120 years.   The McGill family had a vision and a belief that Catholic education played a vital role in the future of the Church.  McGill-Toolen continues to benefit from the generosity of benefactors who share this belief in the importance of Catholic education and determined that a planned gift is the most effective means of supporting the mission of the Church.  Planned gifts designated to McGill-Toolen Catholic High School have provided much of the funding for the capital campaign as well as a significant portion of our scholarship funds.  Individuals and families who have demonstrated their commitment to Catholic education through a planned gift to the McGill-Toolen Foundation will become a member of the Lipscomb Legacy Society.

What is a Planned Gift?  A planned gift is a contribution that is arranged in the present and allocated at a future date.  Commonly donated through a will or a trust, planned gifts are most often granted once the donor is passed away.

Who Can Leave a Planned Gift? Anyone at any age!   Planned giving is not just for the elderly.  If you have created your will or are in the process of completing your estate planning, it’s not too late to leave McGill in your will.

Can I direct how I would like my deferred gift to be used? Yes, you have a range of options available including designating your gift as restricted with a specific purpose. 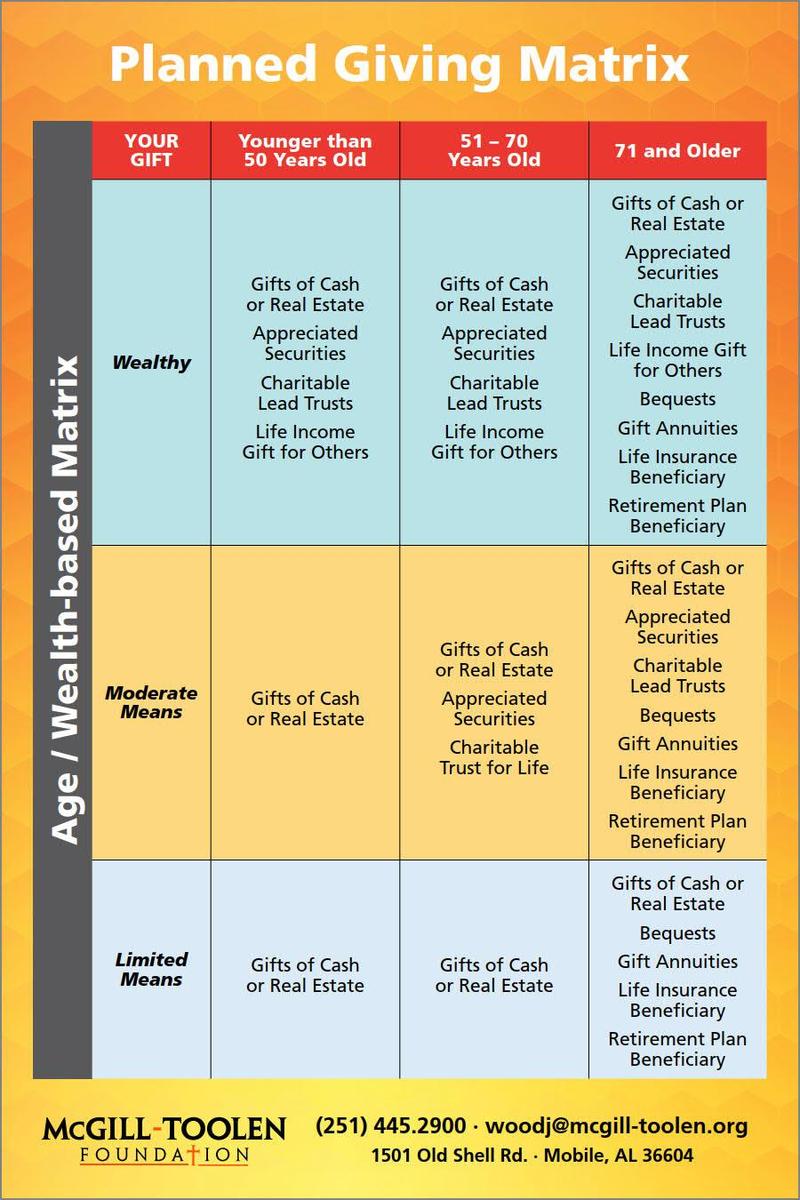 Because everyone’s financial situation is unique we recommend you contact your financial advisor or attorney for information regarding the most favorable option for you. We want to work with you to create a gift that best fits your wishes and our financial needs.  A sample of a IRA/401K beneficiary form is available below.

To learn more about how to leave a planned gift, please refer to our step-by-step instruction guide (Planned Giving Instruction Guide 2020) below. 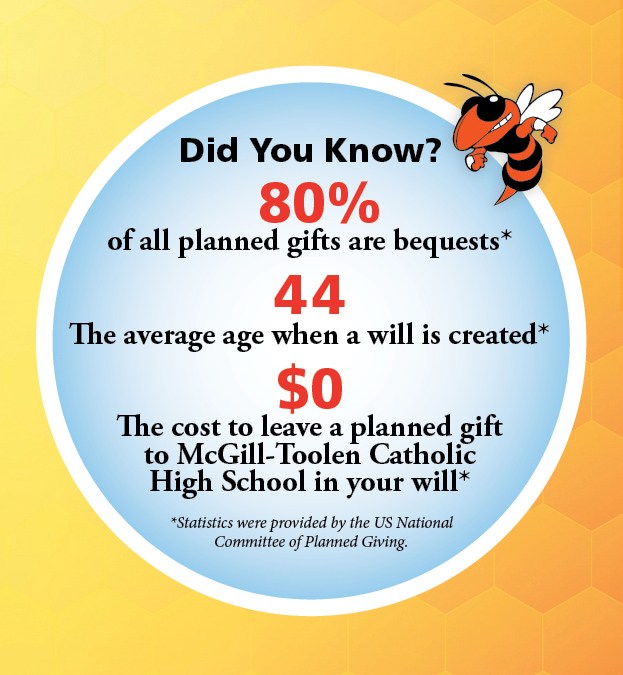 Your Legacy is Their Future

“All you can take with you is that which you’ve given away. “

Thank you for supporting the mission of McGill-Toolen Catholic High School. You have our deepest gratitude and may God continue to bless you and your family.

To learn more about the type of charitable giving that is right for you, please contact