The roots of Catholic education in Mobile go deep. From the 1800’s until the consolidation of the two remaining high schools in 1973, thousands of young men and women received an education unparalleled by today’s standards.
Before 1927, most parishes had their own high schools, staffed by religious. Small classes and the example set by the devotion and dedication of the religious were a powerful combination for transmitting knowledge and the values that prompted those men and women to give their lives to God in the service of others.
SPRING HILL COLLEGE (1830-1935)
The earliest Catholic academic institution in Mobile was staffed initially by missionary priests. In 1847, the Fathers of the Society of Jesus took over its permanent administration. In the early days there was no distinct designation of "high school" or "college" levels. When Spring Hill College closed its high school in 1935, McGill Institute was the only remaining boys’ high school in the city.
VISITATION ACADEMY (1833-1948)
At the invitation of Bishop Portier, the Visitation Nuns established a school for girls. Like so many of Mobile’s early schools, it was a boarding school that also enrolled day students.
ST. VINCENT’S (1847-1935)
An outgrowth of the boys’ orphan asylum operated by the Brothers of the Sacred Heart, St. Vincent’s prospered until the Civil War. Then Reconstruction and severe epidemics of yellow fever brought hard times. The school closed twice before it became a parochial school, and the Brothers stayed on until 1919, when the school was turned over to the Daughters of Charity, who continued its operation until 1935.
CATHEDRAL SCHOOL (1848-1940)
The Brothers of the Sacred Heart operated Cathedral School from 1848 until its first closing in 1875. They resumed its operation from 1886 to 1895, at which time the school was placed under the management of the Sisters of St. Joseph, who operated it until 1940 when it closed permanently.
ST. PATRICK’S (1868-1927)
The Sisters of St. Joseph of Carondelet staffed this academy located in the Grove (today’s Beauregard Street area). Although the elementary school enrolled boys and girls, the nuns offered a high school curriculum only for the girls. The high school was discontinued in 1928 when Bishop Toolen High School was built.
ST. JOSEPH’S (1884-1928)
The Sisters of Mercy of the Union opened St. Joseph’s in 1884. It was one of several schools that discontinued the high school portion of their curriculum when Bishop Toolen High School was built.
CONVENT OF MERCY (1895-1968)
The Sisters of Mercy of the Union operated this girls’ school which was called at different times Convent of Mercy Academy and Mercy High School.
McGILL INSTITUTE (1896-1973)
The old Chandler residence on Government Street was the site chosen by Felix McGill to found the free school for boys that his brother Arthur intended to endow. When McGill opened in 1897, the faculty consisted of a priest teacher and lay teachers. The Brothers of the Sacred Heart took over the operation of the school in 1928, moved with it to its new location on Old Shell Road, and continue to serve on the faculty.
ST. MARY’S (1898-1927)
Like Spring Hill College, St. Mary’s School still exists, but the high school portion of its curriculum was abandoned long ago. The Sisters of Mercy of the Union discontinued the high school when Bishop Toolen High School was built and centralization of the school system began
MOST PURE HEART OF MARY (1917-1968)
The Josephite priests established Most Pure Heart of Mary in the early 1900’s, and the Holy Ghost Sisters from San Antonio began the high school in 1917. The Dominican Sisters of the Congregation of the Most Holy Rosary from Sinsinawa, WI, assumed operation of the high school in 1943 until it closed in 1968.
ST. MARGARET’S (1927-1931); (1943-1960)
The Sisters of Mercy of the Union established St. Margaret’s in Bayou La Batre in 1927, but discontinued the high school a few years later. When the Sisters of St. Dominic from Caldwell, NJ assumed operation of the school in 1943, they reinstated the high school and kept it open until 1960.
BISHOP TOOLEN HIGH SCHOOL (1928-1973)
The Sisters of Loretto at the Foot of the Cross operated this girls’ school from its founding by Bishop Thomas J. Toolen in 1928 until it was merged with McGill Institute in 1973.
McGILL-TOOLEN HIGH SCHOOL (1973-Present)
After McGill Institute moved to its Old Shell Road location, merging it with the last remaining girls’ high school seemed a natural consequence. In 1958, the bands combined. The schools began sharing science, math, home ec, and World Literature classes in 1968. In 1971, the libraries, academic departments, business offices and the newspapers merged, so that by July of 1973 procedures were in place for the formation of a single co-educational institution that proudly carries on the tradition of Catholic education. 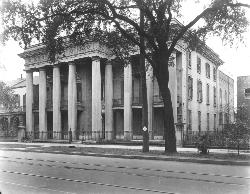